The star athlete accepted a yearlong probation sentence and agreed to testify against four men accused directly in the crime.

Vanderbilt's athletic administration conducted a review of the case, including information disclosed at Friday's hearing.

"The review concluded that Mr. Boyd's admitted actions are clearly inconsistent with the high standards of behavior expected of our student-athletes," a vice chancellor said in a statement. 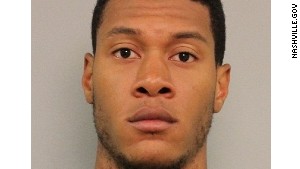 After prosecutors laid out the case against him, Boyd pleaded guilty to one count of being an accessory after the fact. As part of his plea deal, Boyd said he will willingly pay court costs, face 11 months and 29 days of unsupervised probation and "testify truthfully" against the men he helped in June.

Davidson County Deputy District Attorney Tom Thurman alleged in court that early on June 23, Brandon Vandenburg took an unconscious Vanderbilt student into a building on campus. Thurman said he was joined in his dorm room by three others also charged with rape -- Cory Batey, Brandon Banks and Jaborian McKenzie.

"Different individuals" then sexually assaulted the young woman, the prosecutor said, as captured by CNN affiliate WSMV. Vandenburg texted the 21-year-old Boyd a picture of her, which Boyd promptly erased so his girlfriend wouldn't see it, Thurman said.

Soon after that text, Vandenburg called Boyd, "saying the victim had been messed with in the hall and sexually assaulted in the room, and he needed Mr. Boyd to come over," Thurman said.

Boyd went over and, with two other people, moved the woman -- who was lying in the hall unconscious, partially clothed -- to a room, put her on a bed and then left, Thurman said.

Subsequently, Boyd exchanged texts with Vandenburg and Batey, Thurman said. In one, Boyd said, "Tell the boys to delete that sh**. I'm looking out for your a**." Boyd also texted his girlfiend that he "got everything cleared up" and "deleted everything," Thurman said.

More texts followed the next day, including one in which Boyd detailed how he had helped move the young woman and said "she doesn't know anything that happened." Boyd also talked about it with Vandenburg, Batey, Banks and McKenzie at a Popeyes restaurant, Thurman said.

"The defendant was not completely truthful with the police or the district attorney's office in his initial interviews," the prosecutor said. "... He later came forward and gave additional information."

After the hearing, his lawyer, Roger May, described Boyd as "a 21-year-old young man that was forced with making a decision in a situation that he did not fully understand."

"He is paying for that decision," May added, "and he will be paying for it the rest of his life."

CNN's Greg Botelho and Joe Sutton contributed to this report.