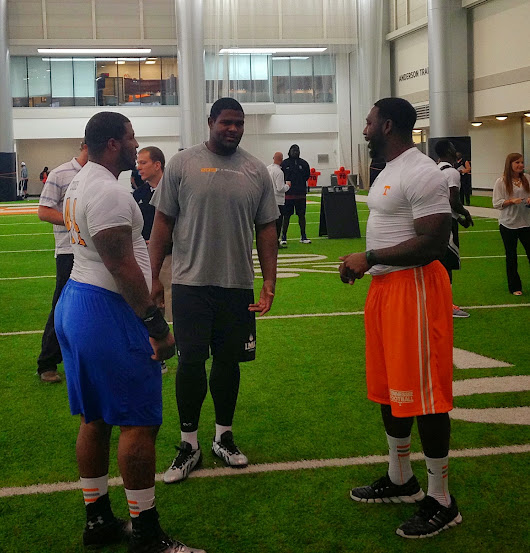 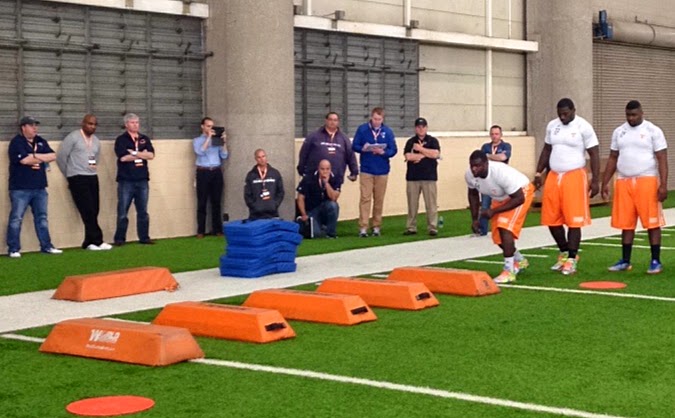 END_OF_DOCUMENT_TOKEN_TO_BE_REPLACED

The sixth in a series of position-by-position reviews of the Tennessee football team with an eye toward the start of spring practice in March.

KNOXVILLE, Tennessee — Tennessee is losing six seniors who accounted for roughly 70 percent of the team’s snaps on its defensive line.

Some of the team’s most visible leaders are included among that group.

But while the outlook for 2014 is challenging, it’s not entirely hopeless. A large crop of newcomers will be pushed to compete for playing time immediately. Just as important, a group of inexperienced returning players will be asked to seize a fresh opportunity for playing time.

Among the departing players, Daniel Hood and Daniel McCullers might be among the most difficult to immediately replace. Big tackles usually don’t just arrive on campus. They are grown and develop over time.

END_OF_DOCUMENT_TOKEN_TO_BE_REPLACED

KNOXVILLE, Tennessee — Tennessee’s aggressive recruiting efforts show no signs of slowing, even as the Vols push past the 30-man limit in their class.

Cory Thomas was the latest player to verbally commit to the 2014 class.

Here’s a look at Tennessee’s class within the context of its current roster. Be sure to check out the disclaimer and details below.

I’ve tweaked the breakdown above, adding a section for roster non-contributors. These are players who are in at least their second year in the program and have not contributed and don’t appear close to contributing right now. I didn’t want to single anyone out, but in order to provide a clear picture of the recruiting efforts, those numbers needed to be considered.

The usual caveat applies: This is a speculative exercise and may not match UT’s goals, strategy, etc.

Even so, with Daniel McCullers and Daniel Hood graduating, the Vols would love to have more depth inside — both on the current roster, and in the 2014 class.

Who could grow into a defensive tackle? Anyone, really, including several options on the current roster. But if you’re looking for a big run-stuffer in the mold of McCullers, the options are more limited.

Dimarya Mixon (6-3, 265) is the only player listed as a tackle among the current group of commitments.

Obviously, all heights and weights should be taken with a grain of salt, but compare those numbers to Hood (6-4, 277), McCullers (6-8, 351) and reserve tackle Trevarris Saulsberry (6-4, 291). Except for McCullers, the differences aren’t immense.

Marlon Walls (6-2, 272) is mainly an end now, although he’s played tackle before and frequently will move inside on passing downs when speed rushers come in.

Vols freshman tackle Jason Carr (6-5, 285) played briefly this year but will have a chance to earn more playing time in 2014.

Long story short, will defensive tackle be a concern in 2014? Probably. A crisis? Perhaps not.

KNOXVILLE, Tennessee — Tennessee will look to regain its home momentum on Saturday against No. 7 Auburn.

You can follow along with live updates on our free live blog.

Check out some photos from the sidelines below.

Justin Worley talks with a teammate (photo by Evan Woodbery)

Receivers warm up before the game (photo by Evan Woodbery)

END_OF_DOCUMENT_TOKEN_TO_BE_REPLACED

KNOXVILLE, Tennessee — Tennessee confirmed the departure of senior defensive back Naz Oliver Wednesday night, although it was lost amid a flurry of significant injury news.

If nothing else, Oliver was a survivor. It’s tough to last to a fifth year in the SEC, and even tougher when you are beset by injuries and hardly play at all.

Oliver will graduate and leave UT with a degree, coach Butch Jones said. He thus could be eligible to play immediately at another school, and Jones said UT wants to help him find an opportunity if he chooses to pursue a final season.

Oliver’s departure leaves UT with three remaining signees from the Class of 2009, the only class signed by former coach Lane Kiffin. They are: defensive linemen Marlon Walls and Daniel Hood and linebacker Greg King. Tight end Joseph Ayres, a former walk-on, is also a fifth-year player.

Oliver’s departure leaves the Vols with an estimated 82 players on scholarship, including at least four former walk-ons who we think are currently receiving athletic aid. When the new semester starts in two weeks, coaches could hand out additional scholarships to walk-ons should they choose to do so. The NCAA maximum is 85.

So what does Tennessee’s scholarship roster look like now? For one thing, it no longer has a New Jersey representative. Oliver was the lone Garden State native.

END_OF_DOCUMENT_TOKEN_TO_BE_REPLACED

In the days leading up to the start of practice, we’ll take a position-by-position look at the Vols as they embark on a new season.

The defensive line will have a different look as the Vols transition back to the 4-3, but there are plenty of veterans in this group and it should be drastically improved from 2012. Coaches will be able to experiment with personnel this spring, particularly to see if any linebackers from 2012 are better fits as ends in 2013.