KNOXVILLE, Tennessee — The toughest part of the college football recruiting game is finding something new and different.

It’s why schools pay artists to create individualized drawings to mail to recruits, why teams compete to see who can stuff more letters in a recruits’ mailbox and why every visit — official or unofficial — is now a well-choreographed show.

It’s also why Vols coach Butch Jones appears to be engaged in some sort of online scavenger hunt with elite defensive tackle prospect Kahlil McKenzie. See for yourself:

#Volnation @UTCoachJones is sending me on a little search! pic.twitter.com/lmlbhn0hPg

Kahlil McKenzie posted this message with the photo above: “Found the first bucket!! @UTCoachJones is counting down the days till July 10th different location everyday!!”

July 10 is the day McKenzie says he will decide between Tennessee and Arizona. Most expect the consensus five-star prospect to pick the Vols because of his family ties to Knoxville. McKenzie’s father Reggie, the general manager of the Oakland Raiders, is a Knoxville native and Vol standout. So is his uncle, Reggie’s twin brother, Raleigh.

But Jones clearly isn’t taking McKenzie’s decision for granted. That means 36 more days of this, presumably. Let’s hope Jones and his staff have some more ideas under his hat.

KNOXVILLE, Tennessee — NFL cornerback Adam “Pacman” Jones spoke to the Tennessee football team on Wednesday, according to a tweet from the athletic department.

Jones played at West Virginia, where Vols coach Butch Jones was once an assistant.

Pacman is one of several speakers the coach brings in during the offseason.

Considered one of the league’s top cornerbacks, Pacman might be better known for his off-field issues. But Butch Jones said that makes him a compelling speaker.

“It’s all about character education and really developing individuals to be men,” Butch Jones said to media earlier this month at a Tennessee caravan event. And really it’s all facets of life. I’ve known Adam Jones for a very long time. … I know every year he speaks at the NFL rookie symposium and has done a tremendous job. I’m very proud of how far Pacman has come.”

KNOXVILLE, Tennessee — The 275 women who participated in Saturday’s women’s clinic at Tennessee not only learned a lot in classrooms, they worked hard on the field.

I got exhausted just watching the ladies run through drills at Neyland Stadium, but they held up well. (Better, I daresay, than a group of sports writers would).

Butch Jones, who hosted the event with his wife Barb, said he hopes to do it every year.

I’ll have a larger story and more photos on the event online on Sunday and in Monday’s News Sentinel.

KNOXVILLE, Tennessee — If there’s even a sliver of hope that quarterback Riley Ferguson will return to the Tennessee football team, coach Butch Jones is doing nothing to encourage it.

Asked about Ferguson on Saturday night, Jones said “We wish him well,” but that he preferred to talk about the players who were on the team.

That does not include Ferguson.

UT could choose to place restrictions on Ferguson’s transfer, but I’m told no decision has been made on that front yet.

Ferguson hasn’t made a public statement (or tweet) since news of his departure became public, but the assumption is that he would like to join his brother at the start-up football program at UNC-Charlotte.

Devaun Swafford in practice this spring (photo by Evan Woodbery)

Fifth-year senior Jacob Gilliam has been a longtime walk-on and is in line to potentially start at offensive tackle this year. Second-year sophomore Devaun Swafford was thrown into the fire and played regularly as a nickel back in 2013. He’ll be in the regular rotation in 2014, possibly as a safety.

Jacob Gilliam in practice this spring (photo by Evan Woodbery)

“They’re very consistent in their approach, and not only are they helping us on the football field, they’re doing well in the classroom,” Jones said before a speaking engagement in Johnson City.

Tennessee’s new scholarship roster is embedded below. Click here if you can’t see the graphic or if you want to view the spreadsheet directly. Be advised the projection of 83 scholarship players is unofficial and subject to change. But there is likely one or possibly two more slots available for a veteran walk-on this summer.

You can also check out the updated depth chart (Gilliam and Swafford are no longer color-coded as walk-ons!) Also, check out the new “needs chart” for 2015. Gilliam’s addition to the scholarship rolls doesn’t impact that calculus, as this is his final year of eligibility.

KNOXVILLE, Tennessee — Tennessee coach Butch Jones seems to have put the future of receiver Alton “Pig” Howard squarely in the hands of his player committee.

During a caravan event Monday night in Atlanta, Jones suggest that the 13-man “player staff” would meet with Howard before making a final decision.

I’m told Howard has appeared before the player staff at least once before and was given some forceful feedback about his commitment to football. The group even referenced a few messages on his Twitter account that they didn’t feel reflected positively on him or the team.

Even so, Jones said Monday night that he “just” got off the phone with Howard, and he seemed far more open to his return than he did this spring.

“He will go before the 13-person player staff and they will meet with him and make a decision,” Jones said. “It’s an honor and privilege to play at UT.”

In that sense, the plan announced this week was a victory.

“I was very excited we were able to maintain the Alabama-UT rivalry,” Jones said. “That’s in our DNA….That was the big thing.”

Jones said he recognized there were complications to either an eight-game or nine-game plan. He’s just happy the final plan preserved the Alabama series.

“In terms of scheduling — eight games, nine games, I really don’t think there is any perfect solution,” he said. “We have to do what’s best for the conference, as we continue to move forward, and I support that. This big thing for us is being able to maintain the rivalry with Alabama.” 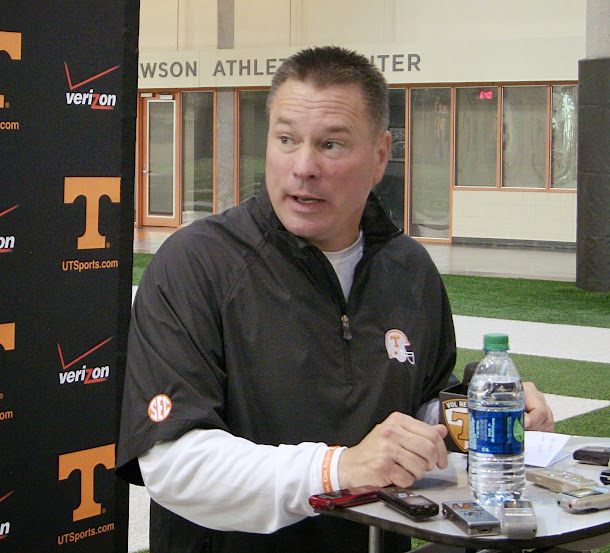 Jones wasn’t present on Tuesday when Tyndall was introduced as the Vols’ new men’s basketball coach. But that didn’t stop Tyndall, a native of Grand Rapids, from taking a jab at Jones’ hometown.

“All the Grand Rapids guys think those Saugatuck guys are really soft. Let him know that,” Tyndall joked.

It is official, I am playing my last 2 years of collegiate football at the University of Tennessee! #Vols #118 #Tennessee #NewChapter

Wegzyn graduated from UMass in three years and will have two years of eligibility remaining. He played in 21 games for the Minutemen, starting 14.

Tennessee coach Butch Jones and at least two of his staff members have children who attend Knoxville Catholic.

Tennessee currently has four scholarship quarterbacks battling for the starting job. Wegzyn should be eligible to play immediately, but will have to work to push his way into the mix this summer.

Wegzyn’s arrival does offer coaches some breathing room in the event that one of the four quarterbacks decides to transfer during the offseason.

KNOXVILLE, Tennessee — Tennessee has released the rosters for a halftime flag football game between former Vols scheduled for halftime of the Orange & White Game.

The seven-on-seven exhibition could be just as interesting as the tackle football.

As some of the listed players are in the neighborhood of 60 years old, we have to imagine that many on the roster will be “honorary” captains who won’t see much of the field.

Butch Jones said Wednesday that one team captain, Al Wilson, was already “talking junk” to opponents on the white team.

Here’s a link to the rosters for both teams.

Jones also touted a “13-foot, 9-inch” trophy for the winner of the flag football tournament. (Update: Check out video of the giant trophy below.)

The Vols are back on the practice field Thursday afternoon. Stay tuned for instant updates. We’ll be talking a ton of football beginning at 10 a.m. on the News Sentinel Sports Page. Listen live.