That’s from the comprehensive USA Today database of athletic budgets released on Tuesday.

The survey also showed that the Vols’ have the seventh-highest expenses in the country and that its institutional “subsidy” of $12.4 million — or 11 percent of its budget — is highest in the SEC.

All these numbers are from the 2012-2013 fiscal year. You can click on the graphic to see the breakdown by category. (Here’s a link if you can’t see it below).

Tennessee’s 2013-2014 fiscal year will end in another month, and should produce some different figures in key areas.

Here’s some context to the current numbers:

* Most of the current subsidy comes from a $11.4 million transfer from the university that helped the athletic department plug a potential deficit caused largely by $7.97 million in “severance payments” to Derek Dooley and his staff.

Even though the money wasn’t all due immediately, buyouts must be accounted for in the current fiscal year.

* When Dave Hart was hired as athletic director, he asked UT’s administration if he could end the annual transfers. By giving excess funds away at the end of the year, the department struggled to build a reserve fund. And that could cause problems in years (like this one) when expenses increased.

* UT Chancellor Jimmy Cheek agreed to “reinvest” some of the athletic department’s contributions to the university back into the department’s budget over the next three years. The biggest payment came from the transfer described in this fiscal year.

* Where does the rest of the subsidy come from? That’s the $1 million in student fees billed to students. USA Today counts student fees in their subsidy total, and most departments — even rich ones — take at least a small bit of revenue from student fees.

Questions? Let me know and I’ll try to answer them. If I don’t know, I’ll try to find out. 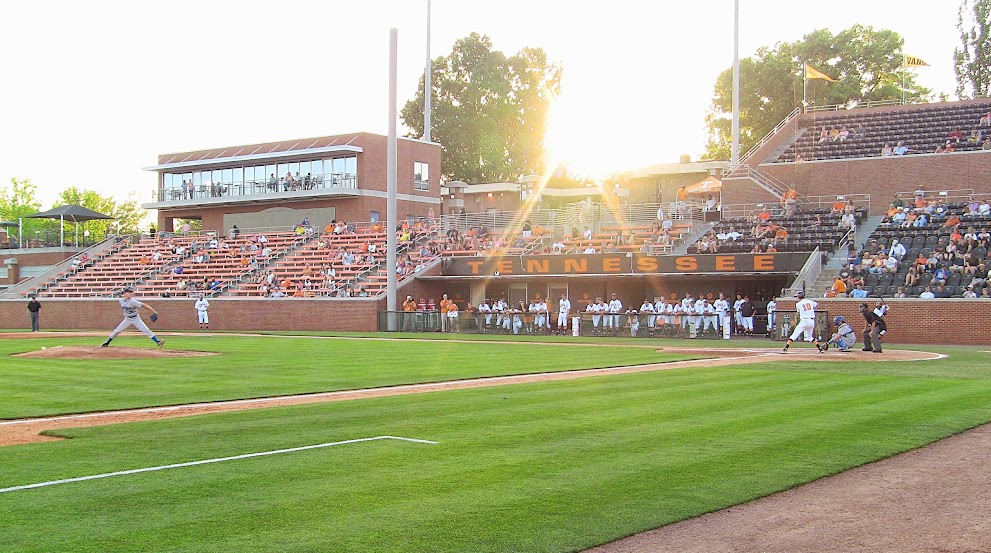 KNOXVILLE, Tennessee — To make its first trip to the SEC baseball tournament since 2007, Tennessee needs to win two games this weekend against Florida or else keep an eye on what’s happening at Auburn. Or maybe Athens. And we’re not even going to mention College Station.

Tennessee has a half-game lead over 12th-seeded Georgia (10-16-1) and a one-game lead over Auburn (10-17), which would fail to make the tournament if it started today.

Georgia hosts 10th-seeded Kentucky this weekend, while Auburn takes on No. 6 seed LSU.

For the sake of simplicity, we’re viewing this as four teams (UK, UT, Georgia and Auburn) vying for three spots. (Texas A&M and Arkansas are both 13-14, but adding them to the mix would be insanely complicated and I’m not sure it would make a difference).

* UT wins one of three. The Vols (12-18) are in unless both Auburn and Georgia win at least two games. (Except if they both go 3-0. Then Kentucky would be left out.)

* UT is swept by Florida. The Vols (11-19) are in if Georgia is swept OR Auburn is swept OR if both Kentucky and Auburn are swept.

* Kentucky clinches with one win over Georgia or one Auburn loss to LSU. The Wildcats are eliminated if they are swept AND Auburn wins all three games AND Tennessee wins at least one game.

* Georgia clinches with a sweep. With two wins, the Bulldogs will be in unless Auburn sweeps LSU AND Tennessee wins at least two. With one win, the scenarios are very complex. If the Bulldogs are swept, they get in only if Auburn is also swept.

Alabama-Kentucky winner vs. No. 2 Ole Miss

USC-UGA winner vs. No. 4 Vanderbilt

Arkansas-TAMU winner vs. No. 1 Florida

LSU-UT winner vs. No. 3 Mississippi State

You can follow the rest of the bracket here (.pdf file).

If Tennessee makes the SEC tournament, then the questions will turn to the possibility of an NCAA regional appearance. But that’s for another blog.

The Vols host Morehead State on Tuesday night. If it’s not a must-win game, it’s at least a must-not-lose game. Bad mid-week losses are never good things for an NCAA bubble team, and the Vols already took one last week against UNC-Asheville.

The SEC baseball tournament in Hoover, Ala. (AP photo by Dave Martin)

KNOXVILLE, Tennessee — Tennessee’s series-clinching victory over Kentucky on Sunday was doubly meaningful for the Vols.

At 10-14, Tennessee now wins the tiebreaker over Kentucky and climbs to the No. 10 seed in the SEC tournament. The recent struggles of Auburn, Missouri could give the top 12 teams a bit of a buffer in the league standings.

I think 11 of the league’s 14 teams have NCAA-quality resumes. (Everyone except Georgia, Auburn and MIssouri.) That could create a lack of suspense in Hoover, Ala., particularly if the bubble team(s) are bounced quickly in the single-elimination portion.

The Vols are in decent shape, with an RPI ranked 30th in the nation. (A No. 27 ranking in the Sagarin ratings validates that nice RPI number.)

Tennessee has six SEC games remaining — three at Mississippi State and then three at home against Florida — and two non-conference games. If the Vols go 4-4 in that stretch, their projected RPI ranking would be 37th. While that would probably be enough, although UT would prefer a bigger cushion.

Alabama-UT winner vs. No. 2 Ole Miss

LSU-UGA winner vs. No. 4 Vanderbilt

TAMU-Arkansas winner vs. No. 1 Florida

USC-UK winner vs. No. 3 Mississippi State

You can follow the rest of the bracket here (.pdf file).

KNOXVILLE, Tennessee — Twelve of fourteen SEC teams make the conference tournament in Hoover, Ala., so the accomplishment isn’t necessarily worth celebrating.

But given the competitiveness of the league this year (and every year), there’s a chance that a team with an NCAA-quality resume could be left out. And that team could be Tennessee.

The Vols took one of three from LSU over the weekend in Baton Rouge to improve to 8-13 in the conference. Missouri (6-15 in the SEC) continued to struggle, and will have to fight its way out of the No. 14 slot. That leaves a handful of teams trying to avoid being No. 13.

Tennessee has nine SEC games remaining against Kentucky, Mississippi State (at Starkville) and Florida. Here’s how the SEC tournament bracket would look if the tournament began right now:

* Arkansas-Texas A&M are currently tied and have not yet played head-to-head. For the sake of simplicity, I am pretending that Arkansas has won that series.

MSU-Auburn winner vs. No. 3 Ole Miss

Vandy-UK winner vs. No. 2 Alabama

Arkansas-TAMU winner vs. No. 1 Florida

You can follow the rest of the bracket here (.pdf file). As always, the great challenge of the SEC baseball tournament is that is has the least meaning for the best teams. That’s why taking only eight of 14 teams just wouldn’t work. There would be a good chance that all eight teams would have already secured NCAA berths and thus would be uninterested in depleting their pitching staffs for this tournament.

That said, the SEC tournament is still a lot of fun in good years. And Tennessee would really like to get back. The Vols won the tournament three years in a row (1993-1995). Incredibly, they haven’t made an appearance in Hoover since 2007, when they sneaked in as a No. 8 seed. The last time UT was a No. 4 seed or higher was 2005.

KNOXVILLE, Tennessee — We’re running our annual review of salaries in the Tennessee football program in tomorrow’s News Sentinel. Subscribers can check out the full story on GoVolsXtra later tonight.

There weren’t many changes between 2013 and now,  as you can see for yourself in the two charts.

Among on-field coaches, there was no change at all. All nine coaches are working under the same contract — and same salary — they had 365 days ago.

That jibes with Dave Hart‘s comments during a round of interviews in December. Hart didn’t seem inclined to give raises for assistants who were in the middle of two-year contracts.

Of course, things can change if another team comes calling. But if UT’s assistants were shopping for new jobs this offseason, we didn’t hear anything about it.

Only one assistant has been given a raise during Butch Jones’ tenure, and that was more than a year ago. Defensive backs coach Willie Martinez signed a new deal on Feb. 10, 2013 that increased his base and supplemental pay from $280,000 to $350,000. About that same time, Martinez added the title of assistant head coach for defense.

All the coaches are under contract through Feb. 28, 2015 — essentially, the 2014 season. One-year contracts were once the standard for assistants, but multi-year deals are becoming more routine.

Because the last pay cycle in the current contract runs from March 1, 2014 to Feb. 28, 2015, we’ll check again in March to see if there have been any alterations to the deals in place now.

This clearly wasn’t a video that you or I could take with an iPhone. So I asked UT video director Barry Rice how it was done. Here’s his answer.

* A special assignment: The video team’s goal? “Capture the magic of the event like it was a movie.”

* A strong team: Rice credited Trevor Greene, Erik Peterson and Steve Anderson and others with doing an exceptional job on the film work. “Steve ran all the footage through a color-correct process and I had an audio mix and sound FX session done as well,” Rice said.

* A great voice-over: Rice chose former Vol football player and current motivational speaker Inky Johnson to do narration. Originally, there was a script for Johnson to read.

“After the session, I said, ‘Let’s just chat while we keep recording,'” Rice said. “Most of what we used was from that — just Inky speaking from the heart.”

If I don't play next week, im gonna lose my mind!

Na ncaa still playing the quiet game @morganc44: please tell us you will be back for Mizz!…….."

N I again I apologize to the Volnation for what I did, but I'm a father first!

KNOXVILLE, Tennessee — In a series of Twitter posts made during Tennessee’s loss at No. 1 Alabama, suspended defensive tackle Mo Couch expressed his eagerness to return to the field, but said he had not received clearance from the NCAA.

In response to a question from a fan, Couch said the NCAA was still playing the “quiet game.”

Couch was ruled ineligible on Sept. 12 after Yahoo Sports reported that he was among several current and former players who received cash payments from someone acting as a liaison to NFL agents.

Couch hinted at his motivation for taking money when he tweeted that he was a “father first.”

Couch and his wife have one child. His wife is pregnant with their second.

To the amazing fans/vol family-despite hoping and praying there is still no answer/resolution & we do not know when he will play again!

KNOXVILLE, Tennessee — The wife of Tennessee senior defensive tackle Mo Couch said there has been no resolution to her husband’s case and no word on when, or if, he will play again.

Mo Couch was declared ineligible five weeks ago after a Yahoo Sports report alleged that he and former UT quarterback Tyler Bray received cash payments from Luther Davis. Davis, a former Alabama football player, was allegedly acting as a “concierge” or intermediary between college players and NFL agents and financial advisers.

Tennessee’s only statement on the matter was that the university was investigating the allegations.

Couch, who is married with a child, is from Orlando, Fla., and arrived at UT in 2011 after a stint at Garden City (Kan.) Community College.

KNOXVILLE, Tennessee — The Vols had sold (or allocated to students or groups) about 90,000 tickets for Saturday’s game against No. 11 South Carolina as of Thursday afternoon.

Senior associate athletics director Chris Fuller said the early kickoff (the game starts at noon) and the fact that students are on fall break has contributed to the slower pace of sales.

South Carolina sold about 5,000 seats from its allotment, he said.

UT sold about 3,000 seats to students at area colleges — like Pellissippi State Community College — for $10 to help make up for the absence of UT students this week.