I received an odd packet last week. It was from the Department of Justice, Bureau of Prisons. Enclosed were two copies of the Sunday, Jan. 1, News Sentinel and a letter explaining that the papers had been received by the Federal Correctional Institution in Manchester, Kentucky, addressed to an inmate.
The warden wrote:
“The above named publication has been rejected because it contains an article, which if viewed by the inmate population, could jeopardize the security and orderly operation of this institution.”
The edition was our Year in Review, so the articles covered the entire of breadth of 2005. I don’t know who sent the papers, which inmate they were addressed to or which article might have proven incendiary in a federal pen.
But it’s somehow heartwarming to know that in the depths of the federal system some bureaucrat still considers our mundane, old ink-on-newsprint words too hot to handle.

Today’s letters to the editor include some supporting the Tennessee Right to Life ad that runs from time to time in the Sunday Perspective section. It depicts — in the form of a comic strip — a so-called partial-birth abortion.
Whenever the advertisement appears, some readers complain that they find it sickening. The question of whether the News Sentinel should accept the ad was one of the first I was asked when I arrived more than four years ago. As editor, I don’t decide what ads to run or reject, but I said I thought we should accept it, not because of my personal views on abortion, but because of my strong belief in free speech.
The creators of the ad, and the letter writers, argue that it isn’t the depiction of partial-birth abortion that is sickening, it is the reality of the procedure. In other words, they believe it is right to publish something that is offensive in order to force readers to confront a difficult truth. That’s an argument that often comes up in news meetings when we are considering publishing facts or photos that will disturb some readers.
The ad typically appears around the anniversary of the Roe v. Wade decision, on Mother’s Day and on other selected occasions. We run it in Perspective because that’s where we feature opinion content, and the ad would be even more jarring elsewhere in the paper.
Here are today’s letters.

END_OF_DOCUMENT_TOKEN_TO_BE_REPLACED

A friend and longtime colleague, John Temple, is editor of the Rocky Mountain News in Denver, where I worked for 10 years before coming to Knoxville. He reached a different conclusion on the question of whether or not to publish the controversial cartoons depicting Muhammad. His explanation of the decision and the reaction to it make interesting reading.
Check out his blog.

The point of Scott Barker’s story in Sunday’s paper was that, more than 140 years after the Civil War ended, Gen. Nathan Bedford Forrest still stirs things up in Tennessee. Reaction to the story included:
— A note from a man who said he refuses to bring images of the Confederate flag into his house and, so, did not bring in Sunday’s paper.
— A message from a reader stating, definitively, that there was no massacre at Fort Pillow and that evidence indicates Forrest was never even in the Ku Klux Klan.
A couple of the notes are attached in the extended entry.

END_OF_DOCUMENT_TOKEN_TO_BE_REPLACED

One of the great things about being a newspaper editor is the range of issues you confront. One minute you might be discussing the presentation of great, global matters, and the next you are dealing with the handling of fractions in cookie recipes.
Often the real pleasure comes from the small things. A few days ago I got this message from a reader whose parents’ lives were touched by a photo that appeared 60 years ago. In the midst of furor over war and peace, East and West, liberal and conservative, it’s nice to remember how the News Sentinel matters to folks in very personal ways, too.
“Have been going through old photos with my parents, and we came across two from 1946, when the Knoxville News-Sentinel very kindly ran an article to help my parents find an apartment here in town. One of the photos show my parents holding the paper. Thought you might enjoy looking. You can see it here:” 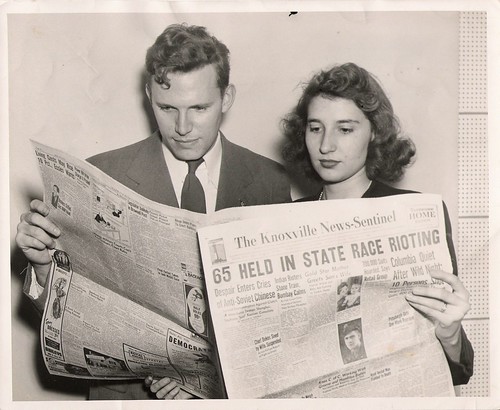 Thanks for the kind words. On behalf of my predecessors, I’m glad we could help.

The question continues to swirl: why hasn’t the American media published the controversial cartoons of Muhammad that have sparked worldwide rioting?
The answer is pretty simple. Many people find the images offensive. Though critics may be quick to claim that editors will do anything to sell papers, the truth is, American editors are pretty conservative when the possibility of offending readers arises. When’s the last time you saw the f-word in the paper?
The exception comes when editors believe that presenting offensive material is crucial to complete and informed understanding of a public issue. Examples might include the images from Abu Ghraib prison, photos of the mutilated Americans in Iraq or Somalia or the text of the Starr report on the Clinton-Lewinsky scandal.
Most editors, so far, have not thought the newsworthiness of the Muhammad cartoons themselves outweighed the offense to some readers. The notable exception has been the Philadelphia Inquirer, which published one of the images discreetly with an explanatory note.
Editor Amanda Bennett was quoted as saying: “This is the kind of work that newspapers are in business to do. We’re running this in order to give people a perspective of what the controversy’s about, not to titillate, and we have done that with a whole wide range of images throughout our history.”
http://www.philly.com/mld/inquirer/news/nation/13792648.htm

Every election year — and that’s pretty much every year — we try to come up with guidelines to help us treat candidates fairly. Sometimes, though, we find our guidelines put us in a box.
For instance, this year we said we would run our “announcement” stories on Page B2. These are pro forma stories we do when candidates send us a press release throwing their hats in the ring, most often to no surprise. However, if a surprising announcement is made, does it deserve better than B2? When we learned that former mayor Randy Tyree planned to run for sheriff, which no one saw coming, we decided it did, and we ran a story on B1 mentioning all of the candidates. But we also ran Tyree’s “announcement” today inside the B section, along with those of his opponents, incumbent Tim Hutchison and Larry Hunter.
Silly? Maybe. Today is the filing deadline, however, and we won’t be running any more announcement stories. Instead, we’ll wrap up all the candidates in a story tomorrow. We figure it’s too late to announce you candidacy after the deadline has come and gone and your candidacy has been noted in the paper.
Chances are we’ll get some heat. Fairness is often in the eyes of the beholder.

In a comment on the previous entry, Jim Estes notes that “it doesn’t take much to make you happy, as long as its bad news about someone getting shot by the VP.”
There’s a kernal of truth in that observation. I can’t agree that my happiness is tied to the vice president shooting someone, or to any bad news. But I confess, I do get off on news. There’s a thrill to telling people something they don’t know or describing something they haven’t seen. I believe it’s a very human urge, and it’s the essential kick of journalism.
If you think I went overboard about chasing the Cheney story, though, check out what my colleague, Terry Morrow, has to say about snagging an interview with a guy named Chesney. http://blogs.knoxnews.com/knx/telebuddy/archives/2006/02/oh_my_gosh_i_sn.shtml
Are we all paparazzi are heart? Forgive me, but chasing stories is what we do, and it when we catch ’em, it does make us happy.

One of the News Sentinel’s sister papers broke the news of Vice President Dick Cheney accidentally shooting a fellow hunter.
Like the News Sentinel, the Corpus Christi Caller-Times is an E.W. Scripps paper. Editor Libby Averyt wrote a column describing how her folks landed the story. I’ve included it as an extended entry. The paper also has produced a video demonstrating the pellet pattern of a 0.28 gauge shotgun http://www.caller2.com/specials/2006/gun_demo/index.html and has a reporter on camera describing reaction to the news. http://wms.scripps.com/caller/katy_garcia_interview.wmv
It’s fascinating for an old newspaperman to see colleagues adeptly doing journalism in a multimedia environment. First, they break the big story via an e-mail alert and on their Web site, then they develop it in print and video.
Is it a great time to be in the news business, or what?

END_OF_DOCUMENT_TOKEN_TO_BE_REPLACED

We’re trying something new in the paper. Starting today, there’s a bit of space at the bottom of Page A2 labelled Readers Corner. Here we’ll be featuring comments from readers about the News Sentinel: good, bad and ugly.
I’m selecting the items myself, for the time being, from the steady flow of mail and e-mail we get. I’ll mostly be looking for comments about the paper in general or about particular policies and editorial judgments. I don’t consider this the place to single out the work of individual staff members for criticism, although general remarks about some of our high profile writers and editors might be allowed.
We’ll also use the space to announce changes in the newspaper, and, from time to time, I may respond to particular issues there. Occasionally, I may lift comments from this blog to use there, too.
Readers Corner won’t be as intereactive as “The Upfront Page.” But it is sort of a print extension of the concept, and I invite all readers to offer contributions to either forum.

Jack McElroy is the Editor of the News Sentinel. He may be reached via email.

Poynter Institute
Project for Excellence in Journalism and Committee of Concerned Journalists
Readership Institute at the Media Management Center at Northwestern University
Online News Association
All blogs on knoxnews.com